Invest in a perfectly poised Opportunity Zone in this northwest Michigan town, Mancelona. Equidistant from the thriving hubs of Traverse City and Petoskey, this OZ is the ideal place to build out. Take advantage of the crossroads community of Mancelona, at the intersections of Route 66, Route 88, and U.S. Route 131. When you bring your business to this community, arrive by private plane at the Mancelona Municipal Airport, take in the sweeping vistas and green grasses at the Lakes of the North Golf Course, and visit the Village of Mancelona’s walkable downtown.

One Scholl Road
This empty lot is located on the southwest corner of US 131 and Scholl Road. The property available for sale is anywhere from 5-26 acres. Given the flat grade and location, it would be an ideal site for apartments, equipment sales, storage facility or a hotel with a restaurant.
Antrim County Business Park
This is an undeveloped 54 acre Business Park. Add additional adjoining parcels (100+ acres available) for rail access, perfect for shipping and receiving. This Business Park is close to downtown Mancelona.
310 Palmer Park Road
A vacant industrial parcel, 3-13 acres available for purchase, located at 310 Palmer Park Road, right in the Village of Mancelona. It is across the street from a few restaurants and commercial businesses, and adjacent to Palmer Park.

Location at a Glance

Antrim County’s Opportunity Zone encompasses the majority of Mancelona township and stretches into the Townships of Star and Chestonia to the north. The eastern-most border lines up with Hayes Township in Otsego County.

This Opportunity Zone—and Mancelona Township—is directly located between Traverse City and Petoskey, resulting in a perfectly situated rural location within quick reach to large urban centers.The Village of Mancelona, which is on the western edge of Mancelona Township, is at the confluence of three major highways—Route 66, Route 88, and U.S. Route 131—and the Huron and Eastern Railway goes directly through the central downtown area.

Manufacturing, specifically metal fabrication, drives employment in this area. Accommodation and food service is another major economic driver—two of every five workers works in one of these two industries.

Tourism is driven by Mancelona’s vast natural resources. Deadman’s Hill, just north of town, offers sweeping views of the Jordan River Valley and serves as a trail head for this section of the North Country Trail. Wildlife in this natural area, from birdwatching to beaver dams makes this a great place to hike in the summer and snowshoe in the winter.

With a population of nearly 5,000 residents in a county of 23,000, this opportunity zone tract is an ideal rural community with space to grow. 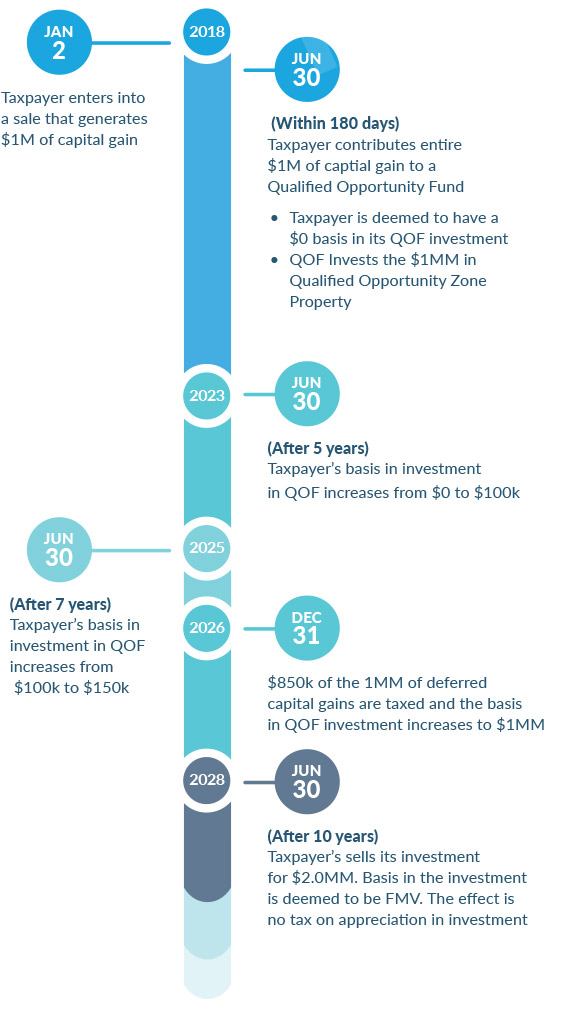 Opportunity Zones is a federal incentive program created in 2017 to direct private, long-term capital investment in distressed and under-capitalized areas, stimulate economic development and encourage job creation. It is one of many tools available that increases the return on investment for investors, developers, community leaders, entrepreneurs and business interests.

Any individual or corporation can defer taxes on their capital gains—profits from the sale of an asset (such as stock, land and/or a business) —until December 31, 2026 if they invest in an Opportunity Zone.

If investments in Opportunity Zones are held for at least five or six years, tax liability on the original gain is reduced by 10%. Investors had until December 2019 to receive the full 15% capital gain tax reduction.

Investors can keep all appreciation on invested gains and permanent deferral of tax liability is given if investments are held in an Opportunity Zone for at least 10 years.

The area surrounding Mancelona was settled by farmers in the 19th century, and the Township of Mancelona was established in 1871. Shortly thereafter, the Grand Rapids and Indiana Railroad came to the region and expanded trading reach to the rest of northwest Michigan. Aside from farming, the abundance of maple trees made charcoal readily accessible, which helped new industries, such as crude iron, grow the region rapidly. By 1900 Mancelona-Antrim was the largest village in the county, with the Antrim Iron Company as an economic driver.

Antrim Iron eventually closed down in 1945 due to the scarcity of trees and more advanced technologies, and farmers transitioned to growing potatoes which remains the predominant crop.

Given its beautiful surroundings and central location, outdoor recreation has remained a major draw for tourists to the area. Recreational developments flank the Opportunity Zone, with the Lakes of the North Recreation Community in the east and Schuss Mountain Ski Resort to the west.

Manufacturing, specifically metal fabrication, is the largest industry in the Antrim area. More than a fifth of the workforce is employed in this field. Tourist-related businesses, such as accommodation and food services, are a close second for economic influence, with nearly 18% of the workforce. This is reflective of the robust recreational offerings the region has to offer.

Retail trade and social and health services are also major industry drivers, employing 11% and 7% of the workforce, respectively.

Antrim County continues to build on its recreational offerings and offer all-weather outdoor entertainment for any season. It strives to be a natural getaway destination for those who are trying to escape the crowds of the more traditional resort-heavy towns on Lake Michigan.

The Village of Mancelona, on the western-most edge of the Antrim Opportunity Zone, is the retail and employment center of the region. This is where the major manufacturing employers are located, as well as the downtown food and retail establishments.

Outside of downtown Mancelona, employment and development extends along Route U.S. 131 which bisects the region from north-south.

Mancelona Area Water and Sewer underwent major upgrades in the past few decades and serves the Mancelona community with all of their water needs.

Population: The Opportunity Zone region has been retaining its population more readily than the surrounding area. Its population of 4,900 has declined by 0.4% from 2010-2018.

The area of Mancelona has a high home ownership rate (83%) and over a quarter of the housing is considered seasonal, due to the area’s tourist-draw. Demand for housing is high, especially because of its proximity and comparative cost advantage to nearby urban centers.

14% of the people living in Mancelona work in the Township, with others traveling to nearby locations. In Antrim County, the dominant industries are Manufacturing (20% of jobs), tourism-focused industries such as Accommodation or Food Service (18% of jobs), and Retail trade (11%). Highland Tank & Manufacturing Co. and Lanzen Fabricating North are two of the manufacturing employers in town.
28.3 Minutes
Average Commute Time, One Way
47%
Percentage of Workers who Live in the OZ & Work in Antrim County

Downtown Mancelona is a walkable, close-knit community, with its main retail corridor around US-131 and the intersection of State Street.

The Downtown Development Authority was established in 1995, and since then it has been working hard to add streetscape improvements, facade assistance, and overall vision for increasing the welcoming and attractiveness of the central business district.

Mancelona draws crowds during its three renowned community events each year: The White Pine Stampede - a cross country skiing event in February - the Mancelona Bass Festival in June, and a hunting competition, the Buck Pole, in November.

The small-town feel of the Village of Mancelona does not preclude it from having a variety of shopping and dining opportunities. The Iron Skillet Café and the local Dairy Delite & Grill are great stops while in the area and visiting.

The Shanty Creek/Schuss Mountain Resort has ski trails and golfing immediately to the west, 6 miles outside of downtown Mancelona. The Lakes of the North Golf Course in the western part of the Opportunity Zone, has 18 holes, and a sprawling 7,000 acres of golfing.

The shores of Lake Michigan, and all it has to offer, are a mere 15 minutes away, as well as the seclusion of Wetzel Lake a few minutes from downtown.